by Prosper Yole
Reading Time: 6 mins read
A A
0
108
VIEWS
Share on FacebookShare on TwitterShare on Whatsapp

When you enter a new place, your first few actions make up your first impressions and they can actually save you a great deal and can directly preserve you all through your stay in that place. Otherwise, it can also have grave consequences that may force your ejection either by yourself or the people in that place.

It was my own story and no one else’. As a pianist, I had just entered a new concert hall. With shoulders greatly propped up and ego so high that it would defeat that of pride itself.
That was the custom. Instrumentalists would go on to build a different kind of presence around them that will suggest that they are no small players.
Whether you’d condemn the act or not, we don’t seem to care what you believe, knowing that that impression kept us motivated in the race fraught with so many discouragements and a very high chances of given up midway.

My First Impression, Wasn’t Good At All

For once, I tried to be myself or at least a little out of the expected for my type. Now I am just humbly showing that I’m not as good as some of them thought. It’s sheer honesty anyway. Was I really that good on my keys then?
But then it may have been a terrible mistake. It went the whole way to affect my composure, self-confidence, without which the expression of music will be deficiently conveyed. I heard myself play mediocre chords and semi-basic amateur combinations, as though I was doing private rehearsals. I may have truly learned from some of those honest mistakes anyway and you could argue in my favour too. When you affirm that I wasn’t wrong to try out new things right there since it seems that I’m maximizing my time to learn new stuff. But, in the music pursuit like in any other, your audience can be very sensitive and what I found really got me scared.

When you enter into a new place, always try to study and understand what they do and how they do what they do. Oftentimes, it takes some time for a new person to be fully integrated into a group. This is absolutely normal because they already existing individuals are even more scared that you may just be what breaks the existing unity and organisation of the group. But usually, it does not take long before you are accepted.
But here is the wisdom. They have certified you worthy to be with them but you still need to understand how they do their things so that you don’t end up being hated silently, and for this I’m referring to a situation when they really are reluctant to outrightly ask you to leave but they are burning full with rejection towards you.
Hence, give yourself some more time to know more, about their runnings of the place, about their ideologies and even about their individual behaviours.

The Result of Careless Impression

For whatever you do, people tend to keenly observe how you are beginning and they let it affect their judgment throughout the entire process. Most of the time, they come to believe that you can’t do it differently. If it was a great headstart, that may be sufficient to cover some of the anomalies that may come thereafter. However, the converse holds true when you deliberately or mistakenly make a careless impression at the start. In my case, I was also a victim of a nonsensical beginning and I paid for it with my own blood and sweat.

I displayed mediocrity and lost the sense of composure under that umbrella of learning some new things. I came to understand that it would be better to stick to what you already know and shine with it than to try out new things randomly that ultimately convey the message of mediocrity to your observers., especially on your first day. I was looked upon as a beginner whereas I was really way better than that. Few weeks after, I felt rejected and abandoned and all attempts to redeem myself were futile.

You Can Redeem Yourself at a Slightly Higher Cost

After an irresponsible start, there comes the desire to prove your true worth. To some, it may seem too late or seamless in others depending on the setting. But generally, redeeming yourself or proving your worth is possible at any stage. Only that it may be more difficult, and not commensurate to what created the rejection in the first place.

The Managers Visit, A Case of Good First Impression

A certain young man needed help finding a house for rent in a new location. He thought to himself, ‘this new place is beginning to boom with businesses and it will be very favourable for me too’. Then he walked several miles from his friend’s place where he had stayed. Thanks to his friend who took the tag of homelessness from him but this was not going to last long. so he had to make the move.
After a very long distance, he muttered to himself  “I can do it, it’s only a few kilometers left”. But his feet would not yield to his persuasions to continue. After all, they have already done enough that day. But what choice did he have anyway? he couldn’t have been able to afford commercial transport services.
On his arrival, it was as though God had arranged someone there to help him. This young man immediately sensed how exhausted he had become and offered him some bread and beverage while he quickly scrambled for an available chair when he could straighten his knees a little.
It was soon evening and the next morning, he set out to scout for an available apartment. After a very long search, it was obvious he was not going to get what he went there for and that was exactly how it was. Everywhere had been booked for.
Years later, the young good Samaritan fellow was to be interviewed for a position in a notable bank. He is quite aware of the strict criteria for employment into that bank in the watch of a very daring manager and employer. He didn’t consider himself so worthy to get the job but he knew that if he gets it, it would be somewhat a lifetime achievement because that bank was a cynosure to all eyes. Everyone in a bank-related discipline wanted to work there.
Anyway, he couldn’t have gotten it either but because of an initial good deed to the manager of the distinguished bank, it was the easiest thing ever when the manager was able to remember his longtime helper when he had nothing.

This story may not illustrate my previous point as a music minister but it aims to emphasize how much the first impression matters. In most cases, the effects of such impressions can remain undiluted for longer than you thought.

When To Begin Creating Your First Impression

As a rule, doing extremely well on the first day at a new place sends a very good message to those around you. So you must always make sure you let your first day be great, allowing yourself to freely express your skills and good demeanor. This applies in cases when you are required to exude some prowess but it is not a hard and fast rule. In other cases, it would be wise of you to remain observant and tactical or even silent and relatively inactive. This is to ensure that you get a good grasp of the place before you unleash your most powerful weapons. The onus lies with you to critically understand when to shoot like a rocket or to warm up like the airplane.
This is very important because miscalculating the timings of when to make your marks can result in fatal outcomes that you will be able to rectify only with extra-rigorous efforts.

First impression matters. But it would suffice for me to add that except you are in your closet, it is best to be at your best performance at all times because any moment can make a first impression for someone out there.
Let it be about making good marks that will make the whole journey a lot easier. After all, a race started nicely carries its own advantages and higher chances of obtaining victory at the end. Create a first impression that matters.

50 Funny New Year Resolutions For 2022 You Can Relate With

50 Funny New Year Resolutions For 2022 You Can Relate With

5 Financial Tools You Should Adopt This New Year [2022] 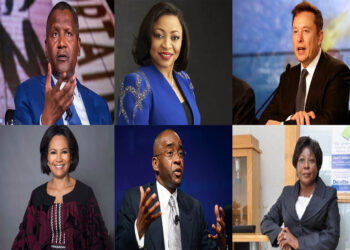 20 Inspiring African Business Leaders Every Entrepreneurs Must Follow In 2022